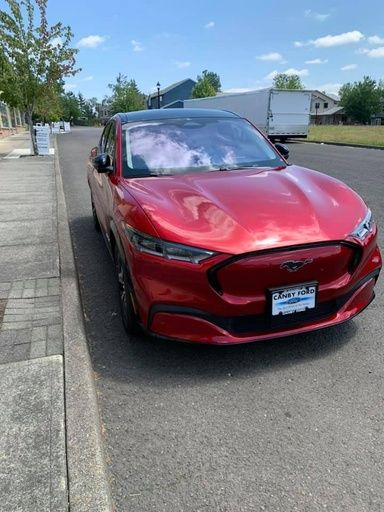 My 2021 Mustang Mach-E (MME) is my first electric car, I had hesitated due to living in a townhouse where I can't charge at home.  After I totaled my car I began to do some research,  finding that in fact DC fast charging isn't nearly as detrimental to cars as it had been years ago. So I went for it.

I am a bit unusual as the purchase of the MME was a bit of an impulse buy. I didn't pre-order it, I went dealer to dealer to find the car I wanted.  I had considered VW, and Tesla, but found them boring or out of my price range.

I constantly get asked what kind of car it is you don't get that with Tesla.. I even get thumbs up from Tesla drivers,  it is a very good looking car, and in the PNW(Portland specifically)  Tesla is probably 90% of the electric cars and the Leaf fills up most of the rest.   The MME is still a rare sight.

I love the car, I really do. There are some 'gotchas' with the car.

1.  Blue Cruise isn't like 'autopilot' or 'FSD'  it has the potential, but isn't there yet.

2. The feature roll out is a bit stunted, I feel ford could be doing more and better things for the Sync 4 system.

3. Some cheap parts being used.   Such as the backup camera,  it is garbage.

That's really it, those are my complaints.

Range:  The competition says they have longer range, but in  real world tests, the MME extended range comes out on top.

Charging: while Tesla's Supercharger network has the upper hand right now, companies like Electrify America are catching up quickly, a coast to coast road trip isn't that scary anymore(plus Tesla is opening up their network to other cars this year)

Overall, it is a fantastic automobile, and a really nice electric car.

If you can get your hands on one, I highly recommend it.

Permalink for this article: https://myevreview.com/615f17d8df169