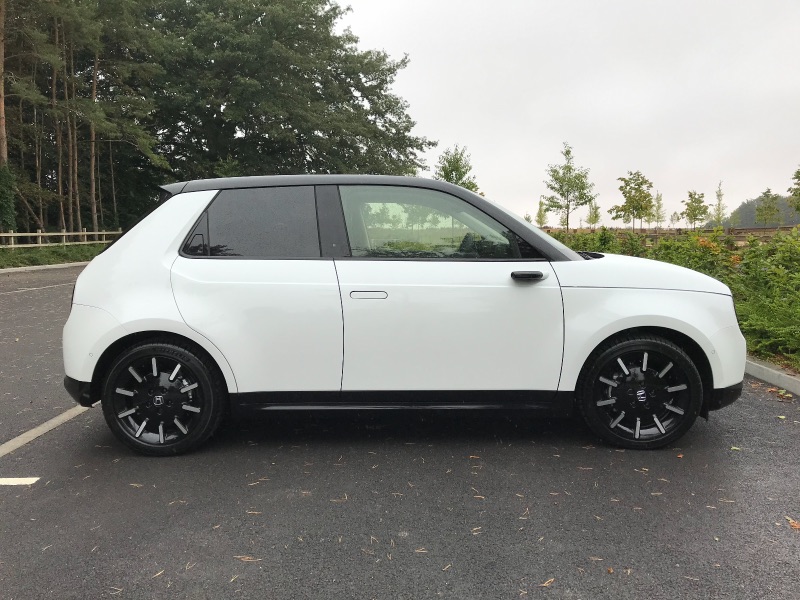 Range Anxiety is for ICE drivers

Day One - and it rained! Much bigger than I needed and too expensive

Range Anxiety is for ICE drivers

When this concept car was first unveiled at Geneva Motor Show in March 2017, it created quite a stir. Some thought the styling of the 3 door Honda Urban EV looked retro. Its simple lines were partly driven by aerodynamics. The designers were keen to minimise its drag coefficient. Its looks made a statement. This was a battery powered vehicle designed from the bottom up, not an electric conversion of an existing design. A radical styling departure from any other in the Honda family.

The more we learned about the car, the more the desire to own one. This could become a classic, a milestone. The first of a new breed of Honda battery powered electric vehicles.

And so we waited. And waited. Until March 2019 at the Frankfurt Motor Show, where the Honda e Prototype was launched. Now a 5dr car, trying hard to conceal the rear doors, flush door handles, 17inch Gas Burner wheels and neat pods on the doors that house the rear facing cameras. More aerodynamic that traditional wing mirrors, these pods project less than the flared wheel arches needed for the wide tyres. Although promoted as an City car for urban use, it was soon clear that 150 bhp motor would make this a fun drive on English rural B roads. We were sold. It was green, it is the future.

Driving electric had come a long way from the Honda Insight and the Honda EV Plus.

In May 2019 Honda were accepting Reservations. Deposit paid, the next milestone was September when it was converted to a firm order for the Honda e Advance despite to Test Drive.

I had managed to see the Honda e Prototype on display at The Design Museum in London July 2019. It was bigger, taller than I had imagined. I was sold.

By March 2020 e’s were pounding the streets of Valencia. Enthuiastic bloggers uploaded tempting videos of the car in action, complete with edited clips of computer-generated visuals from the Honda PR machine.

Of course the promised June delivery schedule soon came and went, as the world was immersed in the Covid19 pandemic.

It would be late July/ early August when my car was finally delivered.

The Test Drive soon confirmed my choice. I could not believe the quality of the ride. Despite having ‘lowish’ profile tyres at 45mm, the ride was smooth. I didn’t notice the bumps, and imperfections of a typical British road, post austerity.

And it was so easy to drive. No gears, no shift. Just a switch for Normal to Sport mode, and a chance to try out the paddles on the steering wheel, that adjust up to 4 levels of regenerative braking. The motor delivers powerful torque to the 17″ wheels, and Michelin Sport tyres. It took no effort to increase speed, although the display in front of me kept flashing 30, 40 or 50 to remind me of speed limits. Once on the open road I was soon exceeding 60mph and the car just floated along. Not too much tyre noise, and of course no sound of an ICE power train.

Now after “owning” the car for more than a year (and it helped me stay sane during Lockdown) I wonder why there are so few Honda e’s on our roads. In part perhaps because Honda UK did little to promote it. People may perceive it being “too expensive” and its range too small, despite the average UK commute being 15-20 miles. But those that took the plunge are more than happy. Its not an SUV (fortunately) and maybe not a family car, but it bigger than you might think, especially inside.

So I have no regrets. I smile whenever I go up steep hills, or down them. Have become a more courteous driver - there is no loss when slowing down to give way - and then the benefit of a clear open road. The car is more than quick enough on the uptake.

I love the simplicity of its styling, both inside and out. Many of the reviews focused heavily on the screens and cameras. The cameras, which are numerous, are great when parking. I usually drive with the 2 large touch-screens blank. Just black. While driving their are plenty of real buttons and knobs to adjust heated seats, steering wheel or climate in the cabin. The ergonomics are good. Not sure I would want it all touch screen like Teslas big iPad solution.

So yes, I’m very happy with my Honda e, so thought I would share these thoughts here.

Permalink for this article: https://myevreview.com/61c5d7a58b03c