A Compelling Car With a Few Quirks

Kia put together a car that seriously impressed this former Tesla owner. A Compelling Car With a Few Quirks

Despite being a relatively new entrant into the EV segment, Kia managed to create a car on a dedicated EV platform that compares favorably to Tesla, the longstanding industry leader.

The combination starts with the E-GMP platform, which combines an 800v electrical architecture with a drive system and suspension that delivers a rewarding experience behind the wheel.  The average motorist doesn't care about detailed electrical specs, but seeing a sub-20-minute charging estimate when they roll into their first charge stop is sure to put a smile on their face.  This 800v architecture means the EV6 can take advantage of the 350 kW charging stations that are starting to become common among the leading DC charging networks.  While most won't be fast-charging on a routine basis, this charging speed mitigates a significant downside of EV ownership that presents when they hit the road to travel.

A notable feature of the EV6 is the slick front motor disconnect feature that enhances efficiency when the extra power and traction aren't needed.  The driver only notices its activation when monitoring the energy flow screen on the instrument cluster, but otherwise the system operates invisibly without any noticeable clunks or lurches.  The system is programmed to disengage during most conditions above 15 MPH at lower throttle levels, but engages quickly when the driver asks for more than what the rear motor can deliver on its own.  There is a perceptible delay when stabbing the throttle at highway speeds, but otherwise it operates invisibly behind the scenes.  The front motor locks in at all speeds above 75 MPH, which is presumably a choice made to enhance driving feel as higher power levels are more likely to be asked for at those speeds.  Engaging the cruise control will disconnect the front motor at higher speeds, which is a useful way around the added range penalty that the front motor adds to the already-considerable losses to wind drag.

On the road, the EV6 AWD compares favorably to others in the segment.  There are paddle shifters behind the steering wheel that can be used to manually adjust the strength of the regenerative braking system, and the left-side paddle can be held to trigger maximum regenerative braking that will bring the car to a stop.  One-pedal driving can be selected, but defaults to "off" when the car is restarted.  This mode has a similar feel to that of the Tesla Model 3, but comes at the expense of efficiency because it precludes the front motor from disengaging.  While it seems counterintuitive, one-pedal driving is not the choice for maximum efficiency because it vitiates the advantage you get with Kia’s clever disconnecting motor.

On the inside, ergonomics are good and the seats are reasonably comfortable.  The driver’s seats aren’t bolstered as well as other models, which makes it harder to stay in place on the leather seats during hard cornering.  Models with suede seats might make this less of a concern, and reports suggest that more aggressive bolstering will be included for the 2023 model year.  Rear-seat legroom and headroom are adequate for adults, but the low seating position makes for an awkward seating position without much thigh support.  The front seats are low enough to prevent the rear passengers from putting their feet under the front seats, so this isn’t the most comfortable place for adults on longer rides.

The infotainment system is reasonably responsive and compatible with wired Apple CarPlay and Android Auto.  The included navigation system does a decent job with routing and traffic information but is completely unhelpful when it comes to planning charging stops on longer trips.  The most help you’ll get here is a message letting you know that you won’t get there without a charge, and you have to find charging stations on your own.  The system is capable of finding charging stops on a given route, and will even filter them among criteria such as charging speed and network, but this is a clunky solution to work while trying to drive down the road.  In addition to the USB-A port for phone connectivity, there are two USB-C charging ports in the front and rear, each capable of 27w to the latest devices that support USB-PD.  The ports for the rear passengers are smartly positioned on the front seatbacks for easy reach while keeping them safely out of range from the accidental kick from younger passengers.

Those coming from the Tesla community will enjoy the manual HVAC climate vents, well-marked control stalks and buttons on the steering wheel, and a more plush ride than the Model 3 and Y currently offer.  That ride comes at the small expense of handling, which most will likely find to be an acceptable compromise.  A curious design choice was a climate control panel that performs double duty with media controls for the infotainment screen.  The two functions can be switched with a button on the panel, and a longer press enables one of them to be selected as the default mode for the panel.  An interesting glitch often occurs when enabling the remote climate control from the smartphone app, causing the default unit to switch to Celsius from Fahrenheit.  This will hopefully be corrected with a future software update.

All-in, Kia managed to put together a car with top-notch technical underpinnings at a price point that favorably competes with others in the segment.  Some minor glitches and compromises take little away, making the EV6 a worthy consideration for longtime EV owners while remaining familiar enough for those switching from gasoline powerplants. 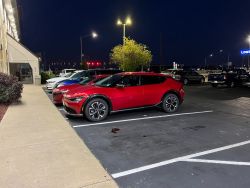 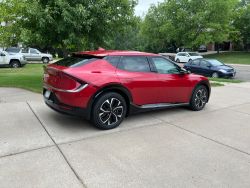 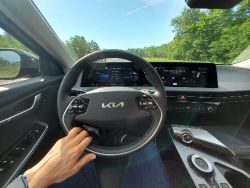 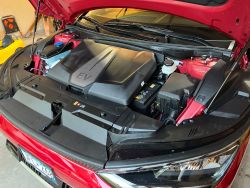 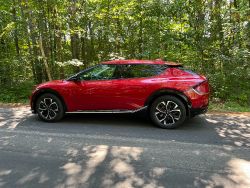 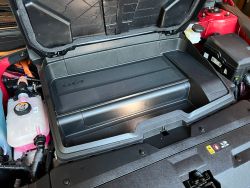 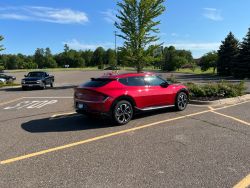 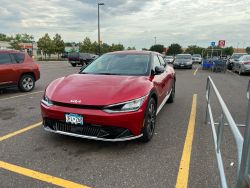