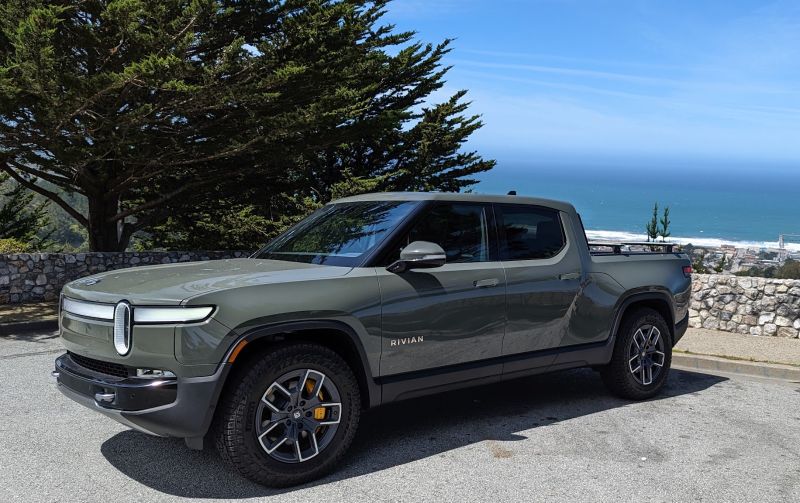 Better than it has any right to be.

Rivian's debut vehicle has the capability, build quality, and style way beyond what could be reasonably expected of a freshman automaker. Better than it has any right to be.

Despite this being Rivian's maiden vehicle, the R1T feels like something a much older carmaker would be responsible for. It's that good and that impressive. Even though there are some squeaks to iron-out, the R1T was well worth the wait.

The highest compliment I can give is that it doesn't feel like a truck. It feels like a sportscar. It is absolutely wild to me that something this big, this heavy, feels this solid, is this fast, and is this comfortable to be in. It honestly has no right to be this good. For me, it's a combination between the motors, suspension, and interior quality (more on that below) that make the ride feel even more expensive than the truck is today — and how expensive it will be in the future.

Acceleration is wild. The car is so responsive, even on my all terrain tires. It makes people scream when I punch it. I think it's very comparable to Tesla, but better than other EVs made by Ford, BMW, or Hyundai. Handling is tight and it feels like it grips the road about 5x better than my old 2016 4Runner. I'm finally comfortable taking fast tight turns! On the flip side, the regen braking is fun, but takes some getting used to — even if you've used it before in other vehicles. I find that it's quite aggressive, even on standard. But that's fine.

The suspension deserves as many words as are here overall. It's really the Rivian's killer feature WRT its ride. It's so smooth, and it's honest to god fun to feel the suspension change so dramatically while you're in the vehicle. The custom drive modes genuinely feel different, and dramatically so. It's not just a throwaway feature or marketing gimmick. Sport mode feels stiff. All purpose is soft. You don't even need to be an expert in cars to know that these mods are substantively different from each other.

Build Quality: Solid, heavy, lux, and what Tesla should be — but a few squeaks (literally)

I don't really know how to describe this any other way: the truck feels substantial. Whether you're looking at it, sitting in it, driving it, or playing around on its exterior, this thing is SOLID. When you drive it, it feels like you're driving something that weighs as much as much as it does. That's a huge compliment and goes to show that Rivian really cares about a quality product. I highly recommend the offroad package because of how sleek it makes the underbody. Like, it's cool.

The tonneau cover... works! It has a sound to it, but I don't have an issue with it. My husband saw it in action one time and said, "Oh, that's gonna break." So your perception may vary haha The frunk (the only other automated opening/closing thingy) is super smooth and I love it, even if I'm still learning where the button is. The things that open manually are totally fine. This includes the truck bed door and gear tunnel. When you unlock the gear tunnel, it doesn't really open very wide, so people aren't always sure they can pull it open.

The interior is... stellar. I. am. shocked. that this is an automaker's first try and that it's at this price. I'm gonna go ahead and compare to Tesla because that's the closest comparison point: this truck's interior should make Tesla feel shameful. The stitching on the seats, materials throughout, and sturdiness is what Tesla should be. It shocks me that the Model X is more expensive. Buttons and stalks are solid and clicky. (PS. thank god for stalks) The floormats even got compliments. The steering wheel is super comfy and the wood console really impresses, with texture and a beautiful design. Accent lighting is nice.

I do have a few complaints though... When driving, there's some squeaking coming from what sounds like the driver side seat when driving in sport mode, though other modes dampen this. (I have a support request to fix this) There is also one noticeable panel gap where the bottom part of the door front passenger door is uneven with the back passenger door. There are two small issues with weather stripping. (also scheduled to be fixed) But these are very minor complaints. The build quality is, again, stellar.

Storage: Once you find it, you'll love it

Storage in the R1T is funny. It's basically all hidden. There's no glove compartment, the truck bed is covered, the frunk is covered, the back seat storage is covered, and the gear tunnel is hidden. It's actually, now that I have the truck, pretty hilarious. It's like they tried to hide as much of it as possible.

But once you do find where you can put your things, you're not going to have any issue taking whatever you need with you. The frunk is a highlight with its two levels and auto-open/close feature set, as is the small container under the driver and passenger seat which is perfect for a pair of sunglasses. The truck is fine and anyone who's complaining about it annoying me (you're really gonna buy a Rivian primarily for hard construction work? C'mon...), but it does extend to a great size when the gate is down. The pass through to the gear tunnel cracked my friends up and the spare tire placement is another impressive highlight for me.

The gear tunnel rocks. I can't imagine how hard this was to build into the truck, but it was worth it. A real wow feature and finally a covered spot to put messy things that are more protected than the truck bed. Hiding the air pumps and first aid kit in the doors to it was smart, and they really do make nice seats. The plastic feels a but cheap, but nothing you'd actually reasonably complain about.

This is a standout feature for me that has left everyone in my truck saying, "Oh damn." It left me saying the same. The Meridian audio is absolutely spectacular. It's super loud, crisp, and you can hear people when they talk to you — even at high volumes. For those who don't know, this is generally a sign of a well-mixed live concert and doesn't mean it isn't loud. Rivian nailed it. This is a world class audio experience in any car, let alone a truck with all the extra space inside of it. The audio does appear to... reduce its own volume when a car door is open, but comes right back when the doors are closed. I think this is what causes the complaint when people listen to the audio with the doors open.

The bass is powerful and clear. It's not overwhelming and it doesn't drown out the mid-tones. Everyone who's listened to an EDM track has smiled. It's truly that good.

Infotainment/Cameras: Expectations exceeded. Smooth and slick, but cameras could be better

I was a bit worried about the infotainment and cameras, not gonna lie. But once I got in the vehicle, my fears were totally absolved. Mostly.

The screen set up is ideal. The "instrument panel" is the right size with the right information and the main control panel is super crisp, perfectly sized, bright, and doesn't actually look like an iPad attached to a car. The design of the dash around it goes a looong way making it feel like part of the actual vehicle and I greatly appreciated this. I'm, 100%, comparing it to the Model 3/Y/X, and must say that the R1 makes their design look pretty thoughtless.

Responsiveness is absolutely not an issue for me at any point. This is a huge departure from my first few experiences with the infotainment. They've clearly focused on this a lot and it's paid off. I haven't tried to zoom in and out on the map like a psychopath to try and slow it down, but I can confirm no issues at all in normal use. Everything is where I expected it to be for the most part with no distracting moments trying to find something while driving. The only time I got confused was trying to find the seat heater (it's obviously in climate #whoops lol). I especially like the way music is handled with the far right of the screen being dedicated to it for passengers, but being able to see the song on my instrument panel and play with volume / skip songs on the steering wheel.

I don't have anything to say about the climate control screen for the back seats other than, "Neat! It works!"

Cameras are dramatically better but the quality is inconsistent depending on what's happening. The 3D camera view is great. Gear Guard is awesome. But the backup camera quality leaves something to be desired. I'm not mad about it, but it does make people comment that they assumed it would be better. Hopefully this can be fixed over time.

I have very few things to say about Gear Guard. It works. There is nothing surprising about it all. It does a good job detecting motion, the cables hook in nicely, and the little Sasquatch is hella cute. While I do wish that the captured videos could autostart when it sees a person, it's easy and smooth to scroll through the saved videos.

I might be more alert while using Driver+ than when I'm actually driving. This is a new automaker and their first time attempting autonomous driving. That doesn't mean it doesn't work (it does, well, when it feels like engaging...), but it something I'm pretty aware of.

Driver+ only works on select highways and does a great job in traffic. Like, impressively so. It slows down when it needs to and keeps the speed you want. While it can't change lanes, it gives you an accurate representation of where you are on the road and the cars around you. Well, mostly. There are two interesting issues. The first is that it thinks oncoming traffic is just another lane of traffic (eek!) and displays it as such, with cars flashing in and out of the next lane to the left — even when there's a barrier. Second, for some reason it thinks cars are at an angle when they're not. I put a pic below. This happens way more often than I'd expect.

There were several disengagements I had to make while driving, but I think the future of Driver+ is bright. It exceeded my low expectations and I enjoyed using it. For me, highway functionality only is enough and, based on the way it's reacted to cars / slowed down and sped up, these people at Rivian know what they're doing.

Permalink for this article: https://myevreview.com/6287e977c2d8d