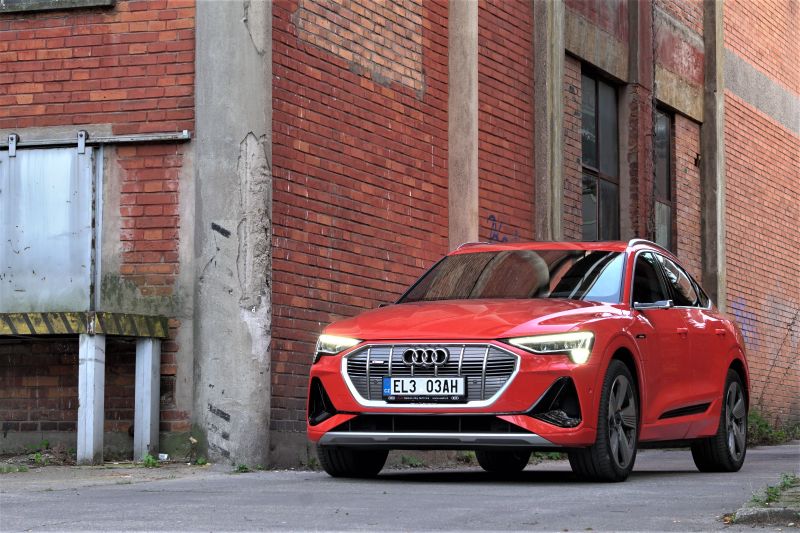 For starters, I’ll tell you what I really liked about my experience with the Audi Sportback e-tron. It is simply the Audi we have known for years.

For starters, I’ll tell you what I really liked about my experience with the Audi Sportback e-tron. It is simply the Audi we have known for years. Designers and engineers have followed the proven recipe as with any other model, regardless of whether it is a combustion engine version or electric version. You find everything where you’re used to, everything works just as well, and the overall design is all Audi. Somebody who really doesn’t understand cars might even have guessed they were driving an entirely normal combustion engine model.

Let me answer a frequent question, and that’s whether the e-tron has high consumption, because that has been the rumor about it since the beginning. Well, it does, and it doesn’t. If we take average consumption of about 25 kWh per 100 km as being high, the e-tron can then be considered to have high consumption (it can even climb to 30 kWh on the highway). But if we compare the e-tron with other electric cars of equal size, we find it’s not so bad. A large SUV weighing around 2.5 tons will just never have the same consumption as the much smaller Volkswagen ID.3 for instance.

The similar-sized Tesla Model X, in my experience, delivers about a fifth more efficient performance. So yes, the e-tron loses a bit, but it is not a major problem. Conversely, with the e-tron (if you, like most owners, will charge the EV cheaply at home or at work), you’ll operate at half the cost of “fuel” in comparison with a similarly powerful, large combustion engine SUV. E-tron is also interesting in that it is perhaps the first electric vehicle whose price is comparable with similarly powerful ICE Audi SUVs and those of the competition.

The e-tron is actually quite heavy; until recently, a size of 2.6 tons was only for the largest SUV around, the Bentley Bentayga. Today, it constitutes a “normal” value of large-battery SUVs. I hope automakers will soon figure out a way to lighten batteries and other car parts.

As I have gotten accustomed to over time, electric vehicles when being driven have an almost unbelievable talent for hiding their high weight. Electric motors can quite effortlessly accelerate and subsequently decelerate the vehicle using regenerative braking, without any loud “motor hum” that we know from large, mostly diesel SUVs. Powerful regenerative braking has the effect that the high vehicle weight does not “eat up” the brake pads during deceleration, and that part of the energy returns to the battery.

The Sportback e-tron can dish out power nicely and steadily. Although it does lack that initial kick when accelerating from a standstill like a Tesla has, it runs beautifully nonetheless. Passing cars is a snap, but more importantly, it is done safely. You won’t find yourself waiting for the turbo to kick in or the right gear selected as you would with an internal combustion engine. While driving at higher speeds, the interior is splendidly soundproofed. On the highway you feel as if you are doing just 80 km/h.

What the Audi engineers didn’t get exactly right is that tram-like “whistling” sound, which quite noticeably penetrates the interior during acceleration and regenerative braking. I don’t know how this is possible, but no other electric vehicle I’ve driven does that so audibly.

The range is, somewhat unrealistically, officially claimed to be 446 km. Realistically, in the combination of city/highway, I was able to travel about 350 kilometres. In the city, where real consumption of electric vehicles is the lowest, the range can approximate 400 km. Conversely, highway driving reduces range to about 250 km.

But what e-tron can do excellently is DC fast charging. Its battery has large nominal capacity of 95 kWh, of which 84 kWh is usable. Another big advantage is its superior thermoregulation, ensuring that the battery will remain at an optimum temperature even during fast charging. Charging can be performed rapidly by power of up to 150 kW. That may not sound exactly like the pinnacle (there are electric vehicles that can recharge at values well over 200 kW), but the e-tron is able to retain the charging curve at 150 kW from 10 to 80%, which is excellent. Realistically, recharging e.g. from 5 to 80% takes half an hour.

The standard-AC charger is also fantastic, managing to handle up to 11 kW of power (there’s a surcharge for doubling that to 22 kW). This means you can recharge to full within a few hours (usually at work or at home overnight). But you can also set the maximum charge, e.g., 80 or 90%, thus preserving the battery.

I measured recharging times on a 175 kW charger - where the maximum that e-tron handled was 148 kW, which is exactly what Audi declares. And here are the measured times:

This means that over a twenty-minute coffee break, give or take, you can recharge for another 200 km of highway driving or up to 300 km in and around the city. In other words, ten-minutes charging adds an additional 100 - 150 km range. That’s not too shabby, is it? If all EVs could recharge that quickly, what a wonderful world it would be.

Tesla has a great network of their Superchargers, and Audi competes with its European network of “contractual” charging stations, (including the Ionity network), where you can easily recharge with a single card “e-tron Charging Service” (of course it also works via the Audi app). Across Europe, there are already well over 200,000 such charge points (AC and DC) with more coming every day.

Equipping with virtual mirrors was one of the e-tron’s main marketing hooks. They are to provide several advantages. The first is improved aerodynamics, which is certainly true. The second advantage is better nighttime rendering of the image from the cameras on the display. The camera has particularly good sensitivity and at night it works nicely - the transferred image is sharp with proper contrast. But this solution has its drawbacks, and it takes time to get used to them.

The displays are positioned lower than conventional mirrors and you just can’t suddenly change that old, ingrained habit of looking out of your mirrors. This means that when quickly checking my “mirrors”, just about every time I first looked out at the camera and only then below at the display. I don’t know how long it would’ve taken me to get used to it, but my one-week test sure wasn’t enough.

The quality of the interior refinement is excellent. Everything is made from the finest materials that Audi has available, all so sophisticatedly incorporated. The body feels very tight while driving, with no creaking noises of any kind in the interior. This is complemented by the impressive spaciousness up front and especially the ample legroom in the back. The sloping roof of the Sportback did take away a few millimetres of headroom as opposed to the basic e-tron, but I sat comfortably in back with still roughly 3-4 cm of space above my head (my height is 180 cm).

Serial air suspension tries to help in enhancing interior comfort. That to me seemed quite rigid however, even in Comfort mode, as though the high vehicle weight hindered the creation of the desired gliding comfort that an air suspension chassis usually delivers. On the other hand, if you want to try out the Sport mode and take a few curves at higher velocity, you have to admire the chassis’ ability to deal with more than 2.5 tons of automobile.

I also liked the optional sports seats. They are plenty comfortable on one hand, and on the other hand, they feature optimum lateral support. In addition, there was the option of extending the seats for taller individuals. What a pity that even after one pays a substantial premium to get these sports seats, the price list indicates an additional surcharge for their electric version and yet another for heating.

On the dashboard, there are two displays with haptic feedback. The haptic feedback works really well. The “push” of a button on the screen is accompanied by the authentic feeling that I’ve actually pressed something. Perhaps the biggest problem I faced during my test of the e-tron was the voice control. Actually, it didn’t work much at all. The Virtual Assistant understood only about half of my commands.

I commend Audi for not giving up on designing a front boot (frunk). It is large enough to accommodate the charging cables and other things that would otherwise take up space in the rear. The rear cargo area doesn’t look too big; at first glance, it is indeed long, but with relatively shallow depth.

If with its model X, Tesla outlined how a big electric SUV should look and drive, Audi’s e-tron has taken its version to near perfection. But note, the key word here is “near”. That is, the Audi e-tron Sportback is surely a great Audi with the excellent build quality, drivability and luxury that its customers have come to expect. That’s the great part. Audi also managed the electrical and software part decently, but it has slightly higher consumption and still-buggy infotainment software.

Audi is developing its e-tron fleet in the right direction. This week saw the introduction of the gorgeous e-tron GT. Sales will significantly also increase thanks to yet another novelty this year - a smaller SUV Q4 e-tron, which moves the base price tag of Audi electromobility tens of thousands of Euro lower. 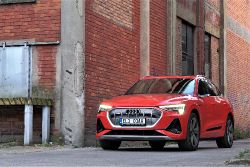 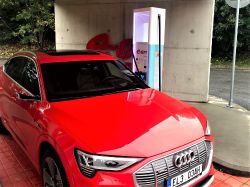 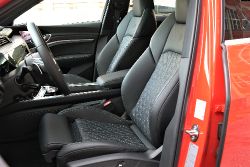 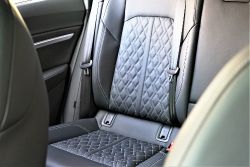 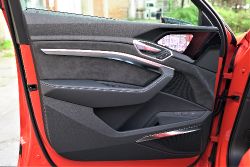 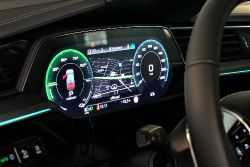 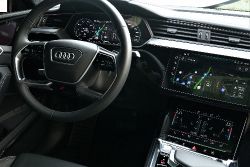 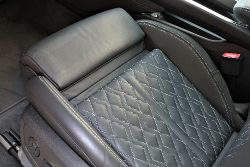 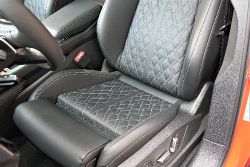 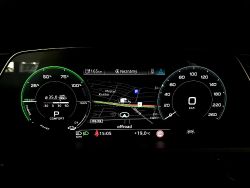 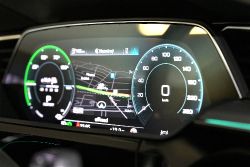 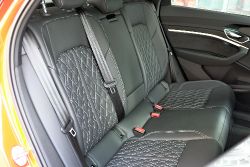 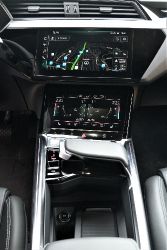 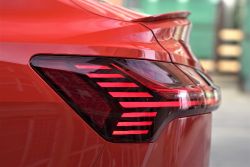 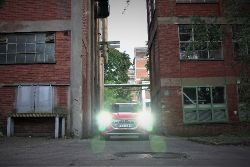 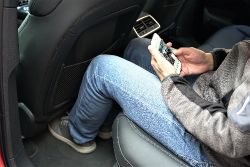 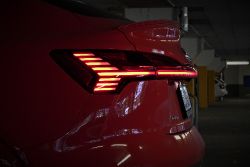 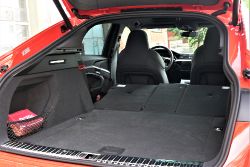 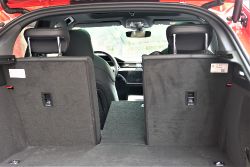 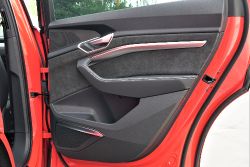 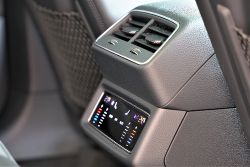 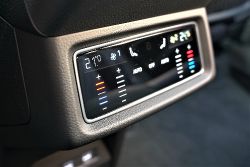 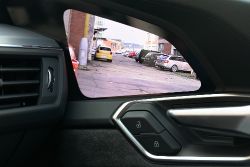 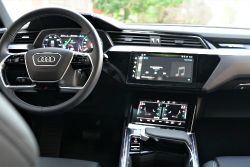